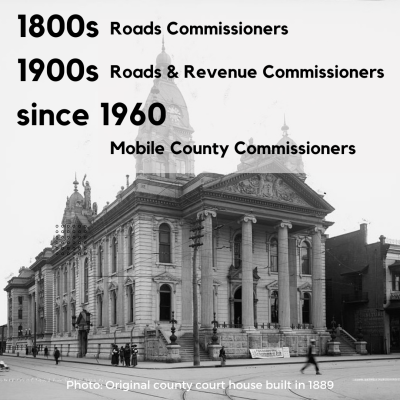 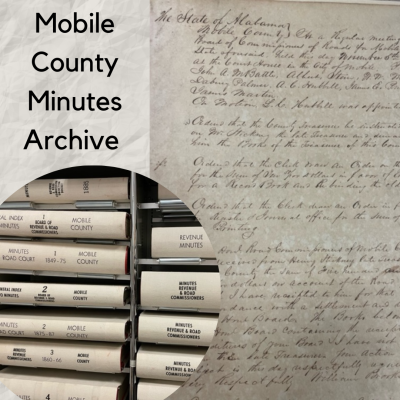 Today, Mobile County has a population of about 415,000. It is the third largest economy in the state, with an annual Gross Domestic Product of about $20 billion. It is led by three Commissioners who serve four-year elected terms of office and represent three defined districts, each with just over 138,000 residents.

Mobile County is the only one of Alabama’s 67 counties with a majority female Commission.

As the governing body for Mobile County, Alabama, the Commission is responsible for budget and infrastructure decision making that enhances quality of life and makes Mobile County a great place to live, work and play. Mobile County Commission maintains about 1,400 miles of roads, 160 bridges, 100 buildings, multiple parks and provides funding for all County operations, including the Sheriff’s Department, Metro Jail, License Commissioner, Revenue Commissioner and the office of the Probate Judge. The Commission is integral to economic development within the region and is committed to increasing public access to water through its Parks Initiative.

But Mobile County and its leadership didn’t start out this way.

Mobile County was established in 1812 by Mississippi Territorial Governor David Holmes. Seven years later, in 1819, the Alabama territory reached the requirements necessary to achieve statehood due to, among other things, rapid population growth throughout the region.

When the County was created, a governing body was established to see to the needs of this fledgling county. Few records exist of the earliest years of Mobile County. According to the Alabama Department of Archives and History, there have been three courthouse fires in Mobile in 1823, 1840 and 1872. Minutes books dating back to the mid-1800s are kept in archive at Mobile Government Plaza.

Mobile County’s governing body was originally known as the Roads Commission before merging with the revenue commission in the mid-1800s to form the Mobile County Roads and Revenue Commission. This name would stand until 1960 when the body became the Mobile County Commission. Over time, terms of service varied from one year appointments to the now four years of elected office. The number of Commissioners also changed quite a bit, with an average of five and as many as nine, according to records. While early Commissioners served part-time and staffing was through political appointments that ended with the term, today’s Commissioners serve full-time and have about 1,600 employees in Mobile County’s primary operational units: Administration, Engineering and Public Works.

Below is a listing of Mobile County Commissioners, their terms of service and notes indicating additional elected office as well as local roads or facilities that may have been named in his/her honor and other facts that may be of historical significance.

This is a page in progress. While the list below is believed to be accurate based on available information, it is not warranted, nor is it purported to be complete.  To suggest information for this page or to report errors, please email publicaffairsdept@mobilecountyal.gov.

This webpage was created by the request of Commissioner Randall Dueitt.

Public Affairs obtained information through Mobile County Records with significant assistance from Mobile County’s Records Department staff. A portion of the records review was through a manual evaluation of Minutes books dating back to 1849, review of the County roads inventory, and additional online research conducted by intern Stephen Davis, a history student at the University of Mobile and Public Affairs staff. His internship was supervised by Mobile County’s Public Affairs Director and UM history faculty.

This page published in May 2022. Future research could include Mobile Register archives, local municipalities’ archives and other archives held by the Alabama Department of History and Archives.